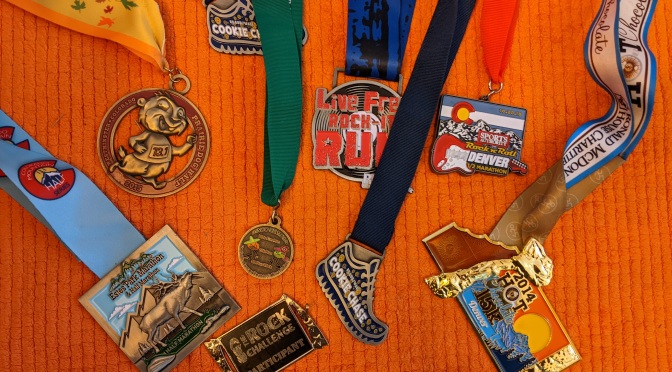 I decided to take some time to talk about another outdoor activity of mine: running. I have been running for a couple decades now, mostly just as a form of exercise which doubles as a form of stress relief and triples as a means of getting our pet dog some outdoor time as well. Over the last 15 years I’ve also run quite a few races, never with the intent of being a highly competitive runner but just to do incrementally better. As I’ve aged, however, the incrementally better is starting to slide and I’m ok with that.

My first race was the Dana Point Turkey Trot 5K in 2008 (in Dana Point, CA right on the coast) which we did as a family. My first 5K time ever was about 26 minutes. Not bad for a first run amid a huge crowd (I quickly learned to position myself nearer the middle so I wouldn’t spend much of the race weaving in and out of less athletic runners.

Since we enjoyed it we then continued to do several more races over the next couple years in Orange County: one in Newport Beach, one in Laguna Beach (2009), the Dana Point Turkey Trot 10K in 2009, the Cinco de Mayo 5k in 2010, a mud run in Irvine Park (2010), and the Ladera Ranch 10K on Independence Day 2011. There are probably a few more that I can’t recall now.

Moving to Colorado in Dec 2011 meant running in the relatively thinner air at 6500 ft (or 5280 for Denver events). I started out with the 2012 Turkey Trot in Castle Rock turning in a time in the 23 minute range (which was fairly satisfactory at the time). In May of 2012 I improved to a 22 minute time for the first time on the 5K.

We did some fun family races over the summer like the Bubble Run and Color Run before I decided it was time for my first Half Marathon. The Denver Rock and Roll Half Marathon was scheduled for my birthday in 2013 and I saw it as an omen that this was a race I was to do.

I finished in a time of 2:07 (that’s 2 hours seven minutes), which was a time I was pretty happy with but I knew I could improve on in the future.

I did a number of family races and a couple 10Ks in 2014 and 2015 including one called the Rock Challenge that not only was 10K but included the ascent of Castle Rock, CO’s Castle Rock. The hike to the top of the rock is only about 1/2 mile, but running to the top in 90+ degree heat and then completing a full half marathon was quite the challenge. It was as hard as the half marathons.

In Sept 2015 I was ready for another half marathon and I decided on the Prairie Dog Half Marathon in Westminster, CO.

It was an improvement of 5 minutes over my 2013 half marathon. I was pretty happy overall and I was looking forward to running more in the coming months. But with winter approaching and a pending house move the next race wouldn’t happen for a while.

In 2016 we moved into a new house in May and much of the spring was devoted to packing and unpacking. That year there were only two races, but they were memorable ones. My son and I did the Warrior Dash in Larkspur, CO in August and had fun going through all the obstacles together.

In November we did another family Turkey Trot, this time in Highlands Ranch, CO on a snowy day. I pushed my youngest in a covered bicycle stroller along the course while my wife and I wore turkey hats.

In 2017 we did the Furry Scurry run with our then nearly one-year-old goldendoodle. We won first place and got a free dog wash.

In July I signed up for my first trail run: the XTerra race in my home town. I did great, probably my best overall, but followed a group down the wrong path long enough to affect my time. Still for a 10K trail run it was pretty good:

By 2018, I was starting to feel the effects of aging really start to kick in (everything seems to change at age 40 physically). I was also working hard on home improvements throughout most of 2018 and didn’t have many free weekends. Finally in September I ran a 10K in Castle Pines, CO with the family (they ran a 5K) on a horrendously hot, humid day and on a hilly course I was just happy to finish without stopping considering the conditions.

In 2019, I ran four races in a matter of three months. The first was a St. Patrick’s Day Race on a chilly March morning. I finished in the 26 minute range, which was rather disappointing. I was wearing a big green hat but it was still startling to see the drop in time from having not run regularly over the winter.

Feeling a need for redemption I trained and ran much harder for a subsequent race a couple weeks later. I ended up with a personal best in a 5K for the Cookie Chase in April:

Now at age 44 running at that pace took a lot out of me even with it being a 5k. Often springtime allergens hit me especially hard with my highest levels of exertion and I was affected for hours afterward.

But I was envious of the Half Marathon finishers. I really wanted to run a half marathon again so I decided that the upcoming Estes Park Half Marathon was the chance to do it.

I got up at 3 am, drove to Estes Park, and got to the starting line on a shuttle bus. The race got started and I got my best half marathon time yet:

At that point I felt done for 2019 mentally and physically and looked forward to 2020 (not realizing there would be a pandemic that would shut everything down).

First was the Prairie Dog Half 10K in Castle Rock, CO. Despite my age I think I kicked ass. I went off trail again and it ruined my time but I felt really good the whole way. And then on July 4 my son and I ran a 5K together in Castle Rock as well.

In 2022 we did only one race, returning to Denver to do the Cookie Chase in blazing heat near 100F. I finished in 25 minutes which was fine with me. I was proud of Evan and Shelley for finishing too in that ultra warm weather.

Next year I’ll get into it again. Just writing this has made me eager to shake off the rust and go for it.

Travel and the Creative Arts